One of the benefits of being a student at the Yale School of Management is the opportunity to listen to speakers with unique vantage points on complex issues around the world. And while leaders visit Yale SOM just about every day, one of the best resources for understanding global issues is part of the university itself: the Yale World Fellows program, which brings mid-career innovators from various sectors to campus for a semester of intensive leadership training.

At the lunchtime meeting of the Business & Politics Club on September 26, two Yale World Fellows visited Yale SOM to discuss issues facing their home countries and their efforts to bring about societal change. Thora Arnorsdottir detailed her campaign to spark a debate in Iceland, in the aftermath of the financial crisis of 2008, on the kind of society the country should have. Miguel Pulido gave a presentation on how the NGO he leads in Mexico is working to get small, rural farmers more involved in the political process. 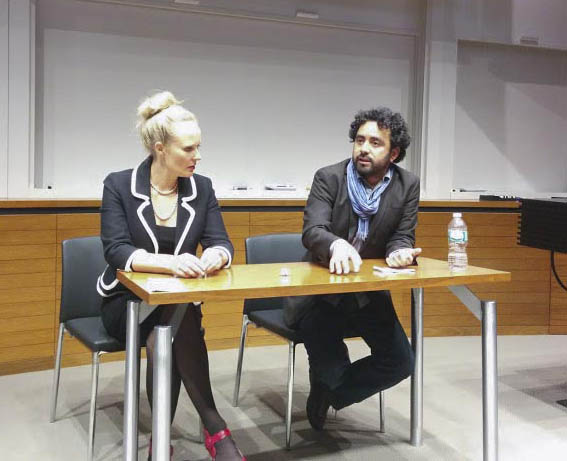 Arnorsdottir, a senior editor at the Icelandic National Broadcasting Service, is best known outside Iceland for her 2012 campaign for the country's presidency. She ran for the office, she said, partly because of her disappointment over the way the country was handling the aftermath of the crisis, which had seen the collapse of the country's three banks and subsequent steep cuts to government services.

The people of Iceland, Arnorsdottir argued, were ignoring a crucial opportunity to reshape their nation into a society focused more on prudence and honesty than greed and arrogance. "It's much easier to talk about inflation, economic policy, and how idiot bankers should be in jail," she said. "It's more difficult to discuss the kind of society we want. It's not easy to really think about the kind of values we want our children to grow up with."

Pulido, the executive director of the Fundar Center for Analysis and Research, has more tangible goals. As the leader of one of the largest NGOs in Mexico, he has focused on the task of getting the government to more equitably distribute the grants and loans it provides to agriculture. At present, he said, the bulk of money aimed at helping farmers become more competitive in national and international markets goes to large industrial farms in the country's north. Despite the fact that small farmers generate nearly three quarters of agriculture employment and nearly half the country's food, they are often shut out of the government aid that could help them pull themselves out of poverty.

The reason, he said, is that the farmers lack political clout. "What politics does is often controlled by business," he said. "This is why we're trying to include poor farmers in the political process. Because if you don't have access to political power, you'll find it much harder to improve your way of life."

For Disha Patel '15, who is one of the leaders of the Business and Politics club, it was inspiring to hear from two people with such vast and varied experience. "It was really great to be able to interact people who are really forcing change in their countries," she said. "And if there's one key takeaway from their talks, it's that it really matters who is at the table when decisions are made. If you want the best results for a country, you need to ensure that the composition of input providers and decision makers reflects the multicultural and pluralistic nature of society."