Much has been written about the poor quality of primary and secondary education in Indian government schools. Researchers have found that 25% of teachers in government schools are absent and only half of those who are present teach. Perhaps due to the lack of value of going to a school system which does provide limited teaching, and due to alternative uses of time, over 40% of India’s 361 million children remain out of school; and 46% of eligible children drop out before middle school.

If this educational shortfall is not fixed, it be disastrous to an economy seeking to take advantage of its “demographic dividend,”—the fact that its population is relatively young and ready to work and will continue to do so in the foreseeable future. India’s population is young relative not only to those of developed countries, but also to that of its leading emerging market competitor—China, which is aging fast. 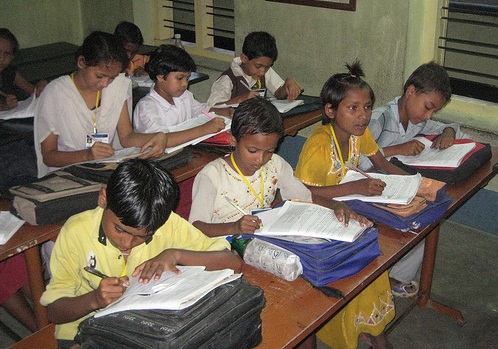 Surprisingly, a large fraction of India’s school-going children, even the poor—over 40%--- attend private schools. Perhaps this is because teachers teach in private schools due to the greater accountability and intense competition and because the medium of instruction is in English, which in today’s global economy is a desirable feature, even among the poorest of Indians. These private schools are by no means fancy, they have minimal infrastructure etc., but the fact that teaching happens within their walls makes them attractive. In response, there is a fledgling movement towards the development of chains of private sector schools with low fees, targeted to India’s poor.

Professor K. Sudhir at Yale SOM and his co-author Sachin Sancheti ask the following question in this paper: If India’s parents and children prefer private schools to poorly run government schools, then would the government be better off using some of its scarce resources to subsidize private sector education, rather than opening new government schools that are less preferred? To address this question, they model household choice of sending children to public or private schools or not sending them to school at all as a function of a variety of school characteristics, including fees, the distance traveled to the school, the availability of transportation (either families’ own transportation or that offered by  theschool) to the children, and gender and age specific preferences and opportunity costs of education using data on school enrollments across a sample of households from rural Uttar Pradesh and Bihar.

Using such a model, they answer questions about how changing the fees or the cost of transportation would impact enrollment in schools itself and the relative shares of private and public sector schools. And they are able to shed insight on the subsidy question.

The results are stark and interesting. First, school enrolment is highly sensitive to distance from home; and especially so for girls. A ½ km of extra travel distance dramatically reduces private school enrolment; from 28.4% to 24% for boys and from 22.5% to 18% for girls in lower primary schools. For older kids in upper primary schools, the effect is a bit smaller, but not by much. Private school enrolment is sensitive to fees. Doubling fees from Rs. 25 per month (about 60 cents) to Rs. 50 (about $1.20) reduces private enrolment by 14%, but only 10% of the students leave for public school, 4% stop going to school. Surprisingly, providing transportation has comparable impact to doubling fees, but in the opposite direction; a bus service increases private enrollment by 16%. Interestingly, the bus service helps expand school enrolment, 13% of the gain is from expanded enrolment, rather than substitution away from government schools. And the gains are substantially larger for girls.---reflecting greater safety concerns for girls in the culture.

All of these get us back to the original question: should the government subsidize private schools, given how sensitive school enrollment is  to distance traveled? With a subsidy, the number of private schools will increase, potentially leading to greater student enrolment. Using some back of the envelope calculations, the authors show that a Rs. 3000 subsidy per month (about $80) will increase the number of private primary schools in rural areas by close to 50% and increase total school enrolment by 6.5%. Secondary schools of course, require a much larger subsidy. A subsidy of Rs. 28000 ($700) per month can double the number of schools and expand school enrolment by about 14%.

Given the disastrous long-term consequences for the Indian economy from poorly educated and uneducated students and the potential benefit from even very small private school subsidies, subsidies appear to be a no-brainer.