Mock Madness was a full day in December of practice casing interviews, behavioral interviews, and technical interviews for both the consulting and the investment banking recruiting processes.

The whole day was a “full-dress rehearsal” designed to simulate the actual interview day with not just paper and pens, but me wearing a suit, my SOM name badge, and a big smile! Each participant received a folder with our personal schedule in the morning—I had a practice case with a pricing strategy consulting firm and a behavioral interview with a management consulting firm. As part of the process, a fellow student would join me in being interviewed by an alum; one of us would be given a behavioral interview while the other was given a case; interview roles switched partway through so we could give feedback to each other. 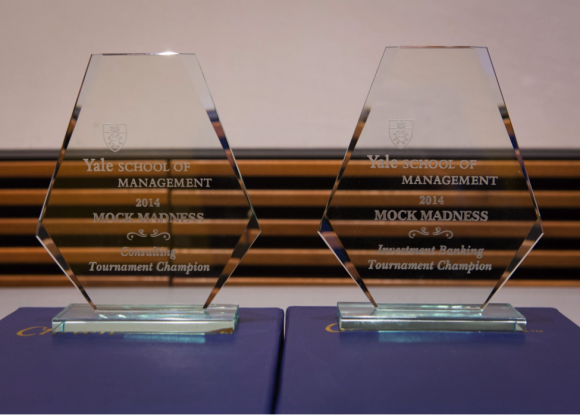 The best thing about the day, apart from demonstrating just how much our alumni care about the school, is that we received honest and constructive feedback from individuals who had already been through the recruiting process. It was unbiased, non-evaluative, and beneficial beyond measure.

So where does the title “Mock Madness” come from? Think March Madness (U.S. college basketball finals for those still in the dark!) In between practice interviews, there were tournaments where students competed against one another in answering behavioral interview questions in 60 seconds or less. The Career Development Office representatives asked questions and timed the responses, while a panel of second-year MBA students were the judges. The winning students kept advancing until there were two people remaining. The finals took place in front of everyone who attended the day including the SOM alumni interviewers! Quite exciting stuff, and there were even trophies to go to the two winners (shout out to Tara Brara ‘16 and Zach Jones ‘16).

So, after our December Mock Madness, what am I bringing forward with me into January? Well, for starters I feel much more prepared for interviews. Being thrown into a competitive environment where there is pressure but also emphasis put on constructive feedback meant that as the day went on, my confidence grew and I presented my skills and unique qualities with more aplomb. My mother said to me before my interview at Yale, “Be yourself but with flourish!” Well I am certainly always myself, and it makes me appreciate how much help I get from CDO in the recruiting process whilst remaining authentic.