The Bundesbank, the German central bank, will continue to participate in the European Central Bank’s Public Sector Purchase Program (PSPP) after the German finance minister and parliament declared that the Bundesbank’s participation was allowable under EU guidelines.

This is the latest episode in a legal battle that has seen Germany’s Federal Constitutional Court (the “Court”) pitted against the European Central Bank (ECB). The Court fulfils a judicial review function similar to the U.S. Supreme Court.

The Court initially issued several preliminary inquiries for review to the Court of Justice of the European Union (CJEU) in 2017. The German Court argued that the PSPP purchases constituted monetary financing of ECB member state budgets, overstepped the monetary policy mandate of the ECB, and created “a potential encroachment upon the Member States’ competences and sovereignty in budget matters.” The CJEU ruled in December 2018 that the program did not overstep the ECB’s monetary policy mandate.

But the German Court returned to the issue in May 2020. It delivered a landmark ruling that disregarded the CJEU’s previous judgment, arguing that the ECB’s actions qualified as ultra vires, or done beyond one’s legal power or authority. The Court also argued the CJEU’s decision violated the principle of proportionality, which states that any action by EU institutions (including the ECB) “shall not exceed what is necessary to achieve the objectives of the Treaties” among sovereign European nations (see here, pp. 18).

It should be noted that the Court explicitly stated that its ruling in May 2020 did not concern any COVID-19-related financial assistance measures.

In the May ruling, the Court cited a number of economic effects of the PSPP that it said the European Central Bank and court had failed to consider. These were:

The Court did not express a view on whether the PSPP constituted monetary financing, which is prohibited by Article 123 of the TFEU (see here, pp. 99).

While the Court, as a German judicial body, has no authority over the ECB or other member states, the May ruling meant that the Bundesbank would not be allowed to participate in the PSPP. The PSPP is by far the largest of the ECB’s asset purchase programs and the Bundesbank is the largest participant, per the capital subscription guidelines for the ECB. Purchases consist of bonds issued by governments, euro-area international organizations, and multilateral development banks.

To address these concerns, the Court requested that the ECB conduct a “proportionality assessment.” The ECB had three months to conduct this assessment, and the Court threatened to block the Bundesbank from participating in the program if it was not done within three months.

In response, the ECB released several unpublished documents and meeting minutes to the German government that highlighted the debate amongst ECB members of the economic effects of the asset purchases (see here). In late June, the German finance minister and parliament declared that the assessment delivered by the ECB met the requirements outlined in the Court’s ruling, which allows the Bundesbank to continue purchasing bonds.

Bundesbank President Jans Weidmann tacitly sided with the German Court. Over the past nine years, he has consistently spoken against the ECB’s unconventional policies (see here). It is currently unclear if the Bundesbank will issue a formal statement on this decision or just let the deadline on August 5 pass, since the Bundesbank has not generally supported the ECB’s unconventional programs in the past. Regardless, individuals close to the matter have stated that the central bank would “take its lead” from the German government and finance minister (see here).

In response to the COVID-19 crisis, the ECB has dramatically increased the scale of its asset purchases, primarily through the PSPP, as well as through the new temporary pandemic emergency purchase programme (PEPP). For more information on PEPP, see this YPFS blog post. From February 2020 to March 2020 the amount of securities purchased under the PSPP increased from €14.1 billion to €37.3 billion. See Figures 1 and 2 below for a breakdown of the ECB’s standing asset purchase facilities. 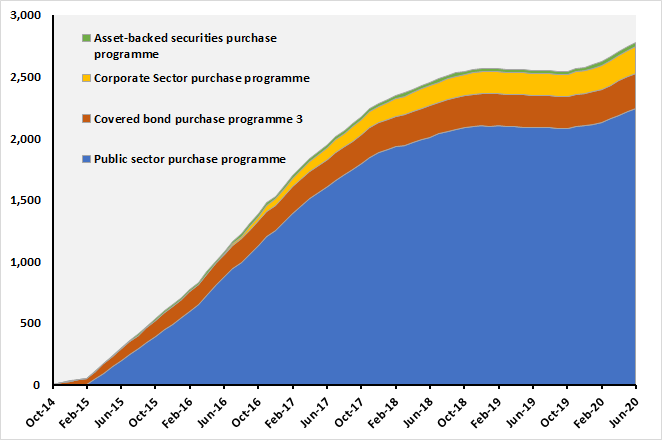 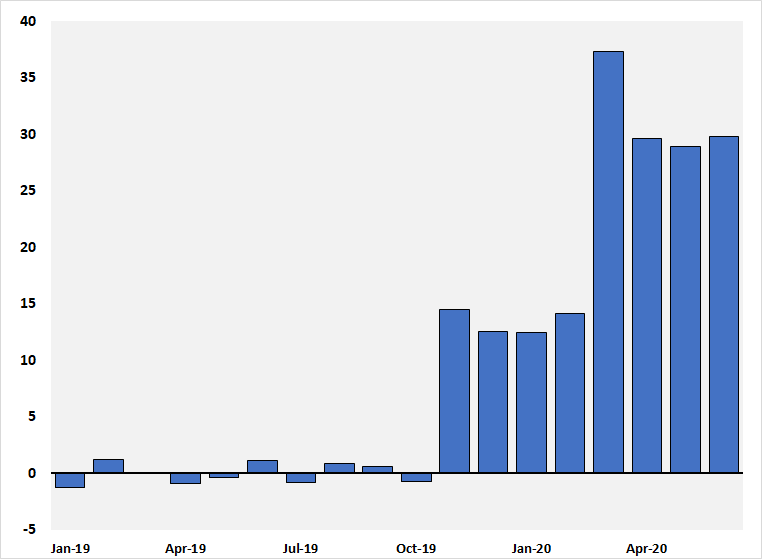 The May ruling received some backlash, with a former ECB vice president calling it “nonsensical.” The far-right Alternative for Germany (AfD) party has already unveiled pending legal action against the PEPP. Some members of the European parliament have expressed concern that the challenge could be the first of many by national governments that seek to question the independence and credibility of the CJEU and ECB.

Part II of Crisis in Lebanon: Buildup of Interrelated Challenges