The Class of 2016 is also incredibly talented. With an average GMAT score of 719 and an average GPA over 3.5, its members are academically accomplished. Students come from more than 150 different schools, the most common being Yale, Harvard, the University of Pennsylvania, the Indian Institute of Technology, and Princeton. The class includes university valedictorians, class presidents, and recipients of Rhodes, Fulbright, Soros, and Humanity in Action Scholarships and Fellowships. 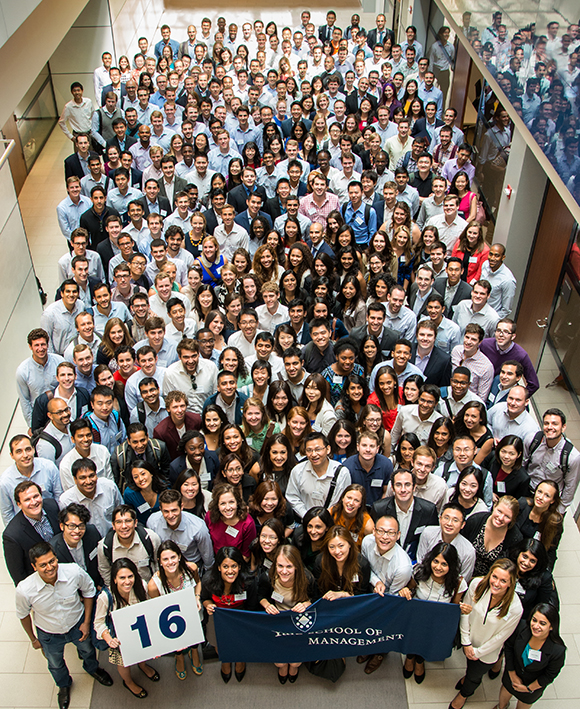 Professionally, they are no less accomplished, hailing from a range employers across all sectors of the economy, including Goldman Sachs, Google, the Turkish Ministry of the Economy, the Motion Picture Corporation of America. Other employers include ?What If! Innovation Partners, Deloitte, the Peace Corps, JP Morgan, Accenture, Teach for America (and India, and Japan), and all branches of the U.S. military—as well as the militaries of other countries, such as Korea, Israel, and Mexico—among many others.

Among the members of the Class of 2016 are: a former nationally #1 ranked table tennis player in England; a former Uzbekistan National Junior Tennis Team member; a former Egyptian National Volleyball Team member; someone who has participated in more than 50 plays and musicals as an actor, director, stage manager, or crew member; someone who was sponsored to play in the 2013 World Series of Poker Europe Main Event; many travelers, including one person who has visited more than 30 countries and another who has visited 26 countries and 47 U.S. states; someone who dived with great white sharks and bungee jumped over Victoria Falls in the same week; a semiprofessional skateboarder; several mountain climbers, including one person who has summited more than 30 mountains, five of which topped 14,000 feet; a gold medalist in China's National Mathematics Olympiad; a published novelist; a winner of the Best Cinematographer Award in the First Look Festival at the University of California School of Cinematic Arts; someone who has appeared on MTV in two different countries; and a former cocaptain of the White House softball team (affectionately known as "STOTUS").

I hope you can see from this glimpse of the Class of 2016 that the Yale School of Management continues its tradition of attracting mission-driven and dynamic individuals. I was pleased to get to know so many of them through the admissions process last year and now to see them enriching our community and becoming part of the Yale University network. I look forward to following their future successes across the globe.