One does not simply ignore the importance of sports in our social lives. This argument becomes clear to me when it comes down to understanding American culture, which is supported by the world's greatest sport events, athletes and rivalries. As a group of international Master of Advanced Management students, we had the opportunity to join a tailgate party before the Yale Bulldogs - Princeton Tigers football game and take a closer look into this phenomenon by watching the game. I myself have been a big fan of American football since I started college in Turkey and I'm still following both the National Football League and college football closely. Don't even ask, but somehow I'm a die-hard New England Patriots fan. 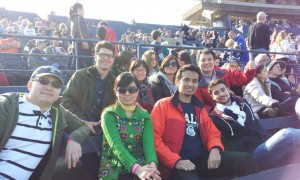 So I was fortunate enough to know about all the complicated rules, positions, game plans or formations of American football, unlike my international friends whose common knowledge of football is basically soccer. I'm also on the same page with them since I've grown up calling it football. And yes, soccer is a really strange name for us, anywhere except United States. "We call it football, you call it soccer".

In an effort to explain the game to our class of mostly soccer fans, Ian Rogan, director of the MAM program, was kind enough to present introductory basics of American football before Sam Rubin's presentation on the "History of Yale Football." I'm especially impressed by the story of Walter Camp who was the legendary captain, head coach and advisor of the Yale football team. He is also referred to as the "Father of American Football" because of his great contributions to modernize American football rules and the way of playing. I believe that the current rules and way of playing are the most important factors for making the game more attractive compared to other sports, in terms of entertainment-show business, strategy and injury prevention.

Each year, Yale plays against its biggest rivals, Princeton and Harvard, (Big three of Ivy League schools) at the end of each season. The Harvard game, also known as "The Game", is one of the fiercest rivalries in the American football history with a great deal of fan and alumni attention but unfortunately the Harvard game will be played in Cambridge this season and return to New Haven next season. As a result, we decided to go to the Princeton game, the most important home game in this season. I found tailgating quite interesting, not to mention tremendous alumni attention; everyone was having a great time with their families, catching up with classmates and cheering "Let's go Bulldogs". Most importantly you can understand how it feels to be a Yalie, when you see grandparents from the classes of the 40's or 50's with their grandkids wearing traditional scarves, shirts and hats. And I have to admit that I felt really proud of myself to be a part of this amazing Yale family before the game, during the game and even after we lost the game by a score of 29-7. True, the Bulldogs are having a bad season due to crucial injuries (seven different players at quarterback in this season) but history is written with their success stories. One last note, we really enjoyed the "Yale Precision Marching Band" and their version of hit songs "Gangnam Style" and "Call me maybe" that were both awesome.