To be short, the session was inspiring. The achievement of B-LAB is no simple one. B-LABS is the company that created the B-Corp movement. B-Labs on its website, claims itself to be “a non-profit that serves global movement of entrepreneurs using the power of business to solve social and environmental problems “. It is currently present in 32 countries and spreads across 60 industries with 976 companies who have been certified as B-Corporations. 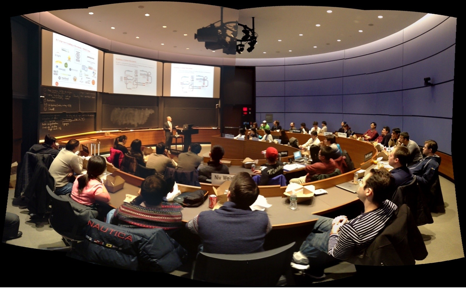 This is no mean achievement for a movement that is so young. It was started only in 2006 when 3 Stanford university graduates, Andrew Kassoy, Jay Coen Gilbert and Bart Houlahan, who had just successfully sold their $250 million basketball footwear company, AND, decided to create something that will impact the world and make it a better place. They went and created B-LABS as a movement to encourage companies to be a better citizen by conferring a certification on those companies which were already being great ambassadors of corporate responsibility. They wanted to make the B-Corps certification as something that companies strived to achieve to prove to the world that as big corporates, they acted in a beneficial way to the society.

From then on, there was no turning back. From the simple start in 2006 to their first certified company BALLE a year later, to the current scenario, they have come a long way. Seeing their great movement, businessmen from Latin America who had a similar idea, approached B-LAB. This was a very critical time for B-LAB since it showed that the movement had credibility and this was one of the first non-US market where B-LAB saw a potential. After their success in Latin America, B-LAB started expanding to countries in Asia and Africa where more companies were eager to prove their worth as benefit corporations, thus giving the B-Corps certification a global recognition and the companies joining a global movement.

The key moment was when American states started passing the Benefit Corporation legislation. B-LAB’s website says that the companies can now be officially recognized by the states to be Benefit Corporations which meant that companies will now have a greater freedom to act in the best interests of the society and enable people to identify them. B-LAB’S B-corps certification is not the same as a benefit corporation though both the terms are often confused and sometimes benefit corporations are also called B-Corps. Benefit Corporations need not undergo any certification and is an official recognition by governments of states while the B-Corps certification is conferred is conferred by B-LAB to companies that meet a high standard of overall social and environmental performance. Be it a B-Corps or a benefit corporation, the goal is almost the same: “Be a good company to the society”.

Andrew himself, stood just over 5 feet tall. But his presence in the room was taller than the ceiling. And if you add his achievement of creating something for a better society, he stood taller than most skyscrapers in Manhattan.

A group from the MAM Class of 2014 now has the privilege of working with B-LAB as part of their core practicum project to deliver a strategic solution for a key goal that B-LAB wants to address. It was great to see such a project being offered to our classmates and I am sure this partnership will mean a lot to both entities. But I really envy the students who are doing this project, since they are definitely playing a part to create a better world.