When Elaine Dang approached me to help organize an event aimed at creating a community in which first-generation college students could share their experiences, I was excited. The excitement was not because the topic is one I’m comfortable discussing, but because I was in a community like Yale SOM that was willing to create a safe space to foster and support what are often uncomfortable conversations. 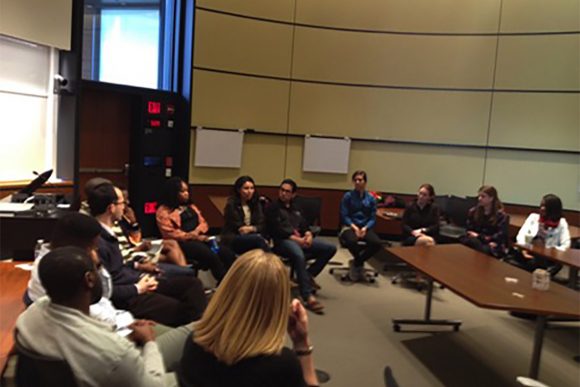 As the date of the event neared, Elaine and I nervously wondered how many people would turn up. Though optimistic, we worried that at this stage in their academic and professional development, some peers would be uncomfortable to divulge—much less discuss—their first-generation identities. Much to our happiness and satisfaction, the event attracted a sizeable number of students and administrators.

Given the intimate group in attendance, the event naturally assumed the format of a roundtable discussion. With Professor Amy Wrzesniewski’s guidance, each participant introduced himself or herself. Following introductions, we asked each participant to think about their top five identities. After hearing from a few participants on what those identities were, Professor Wrzesniewski shared insights into the challenges faced by first-generation college students. From break-away guilt to lack of adequate resources, we learned that being a first-generation college student is not easy!

From laughing about translating legal documents for parents to teaching oneself golf to fit into a corporate environment, the event developed into something so much more than Elaine and I had envisioned. It was clear from the hour and a half that the group had spent together, we had planted the seeds for a new community at SOM. As we work to define how best to continue to foster this community, we are thrilled to see how this event and community has already added to the tapestry of the Yale SOM community.