On April 5, the School of Management welcomed one of the most important characters of the current Brazilian economic crisis: Deltan Dallagnol, the lead prosecutor of the Car Wash Operation, an investigation task-force that is unveiling massive corruption schemes in Petrobras and rocking the country’s political foundations. The event drove a lot of attention, with more than 120 participants accommodated in two different rooms. 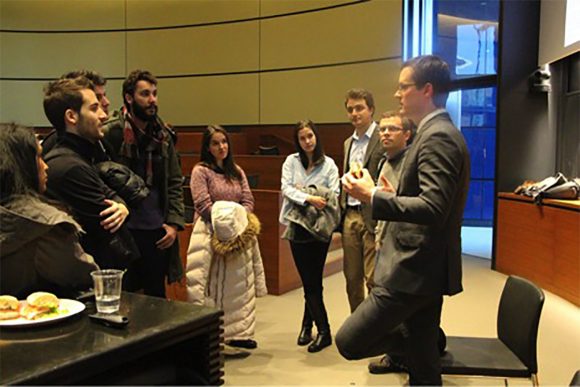 Dallagnol’s career is rather impressive for a 36-year-old professional. At the age of 22, he became the second-youngest federal prosecutor in the country after obtaining a degree in law from the Federal University of Paraná (UFPR). He took a license from his public service to pursue a master’s degree at Harvard Law School. After coming back to Brazil, he was presented with a suspicious transaction involving a purchase of a luxury car between an officer of the country’s ruling party (PT) and a known money laundry facilitator. That was all he needed to pull the thread on a surprisingly complex and pervasive corruption scheme in the country’s biggest company.

Dallagnol started his presentation at SOM with an overview of the Car Wash Operation, known as Operação Lava Jato in Portuguese, and its main accomplishments. Around 180 people have been charged so far for crimes of corruption, criminal organization, and money laundering, with more than $1.5 billion in bribes paid. All this work has been supported by more than 100 international cooperation requests with 30 different countries. So far, more than $700 million has been recovered by the country’s treasury, 12 times more than the highest amount ever recovered in a corruption investigation in Brazil before Car Wash.

He presented a flow chart that briefly explained the corruption scheme in Car Wash. In simple terms, the Brazilian government requires support from Congress to approve bills, a concept known as presidentialism of coalition. This support was secured through indications of officers affiliated with supporting parties to major positions in state-controlled organizations, where they could participate in big purchases and bids decisions. The corruption happened when they favored their decisions towards companies that contributed more to their electoral campaigns and paid bribes. Refuting current criticism that the operation became a political movement, Dallagnol explained that the PT party is in the spotlight of the investigation simply because it is the ruling party in country, that it governs through a major coalition.

After questioned about how he believes that corruption could be eradicated in the country, Dallagnol presented his idea that the Brazilian judicial system needs to be reformed. According to a study, he said, only 3% of the corruption cases in Brazil are actually punished, and most of them are due to small crimes, like police officers’ bribing. To prevent high-level corruption, he discussed the 10 Measures Against Corruption, an initiative by the Public Prosecutor’s Office of Brazil to strengthen anti-corruption laws. With more than 1.5 million individual signatures, the proposal was delivered to Congress as a popular law demand and now awaits discussion.

He said that a similar anti-corruption case that happened in Italy during the 1990s, the Clean Hands operation, had one negative result in the overall fight against corruption: The Italian Congress sneakily moved to protect themselves and approved bills that made prosecutors’ work in anti-corruption cases harder. Afraid that it could also happen in Brazil, Dallagnol asked for support from the international community and, especially, from Brazilian society so the operation could keep working toward the elimination of this terrible crime.

Dallagnol also shared that a great part of the operation’s anti-corruption inspiration comes from the work of Susan Rose-Ackerman, a professor at Yale Law School. He was a guest in one of her classes at that school after the event at SOM.

In a particular discussion, I asked what kept him going through the challenges and pressures he faces on a daily basis. His answer was simple: his purpose in life is to make society better; while working towards this goal, he finds motivation. Although prosecution was his career choice to pursue this goal, I believe that any means may be used to achieve it, as long as we do the right thing. And for that, his accomplishments are a true inspiration to future leaders of my school, and particularly to myself, who believe in the power of business to drive change in the society. He is the proof that the right mindset with a lot of persistence and hard work can effectively make a significant change.

The Latino Leadership Association at Yale SOM was proud to be one of the leading organizations of such event. Check out the video of the event.