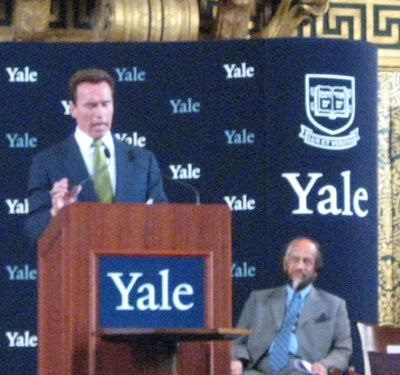 For those that don't know me too well, I happen to be a pretty big Arnold Schwarzenegger fan. I loved Terminator 2 when I first saw it as a kid, and today that film still stands the test of time upon multiple re-watchings. More than just a Hollywood special FX blockbuster, the film has good insights on themes like destiny/fate, the human condition, loyalty, and sacrifice. Aside from his illustrious film career with some of my favourite hits like True Lies, Commando, and Predator, Arnold has also enjoyed a pretty impressive career in real estate, business, and of course, politics. I've often said to my friends here at Yale that I wish Arnold would stop by and make an appearance before we graduate - so imagine my complete and utter JOY when I heard that Arnold Schwarzenegger would be the keynote speaker at a Conference of Governors on Climate Change hosted right here at Yale. After a public address by Yale president Richard Levin and Nobel Laureate Dr. R.K. Pachauri, Arnold took the stage and delivered a 20-something minute speech peppered with his usual humor, and candor on Global Warming and his view on what needs to be done to further the environmental agenda. I thought there actually was some decent substance behind what he had to say, and I really do applaud his efforts in California to lead the way despite the lack of action by the US Federal government. The conference wasn't a one trick pony either - earlier in the day a panel was held at the Yale Law School moderated by Scott Pelley of 60 Minutes. On the panel were Kansas Governor Kathleen Sebelius, New Jersey Governor Jon Corzine, Manitoba Premier Gary Doer, and Quebec Premier Jean Charest. I thought this panel was also very well done, and Jean Charest in particular stood out in my opinion. I've followed Jean Charest's career back in the day when he was leader of the Federal PC Party and I've always thought that he had a lot of potential on the federal scene. Overall I'm not too sure what the conference will actually accomplish but I still found it interesting to hear what individual states and provinces are doing to galvanize some action on the federal level. Sure, a bunch of governors have signed a "Declaration on Climate Change", but real progress on the environmental front can only be made if its on the federal agenda. One can only hope that with a new president about to be elected, perhaps that will be the turning point where some measures will be taken on a broader platform. Picturesfrom the earlier panel and more shots of Arnold in the collage below. 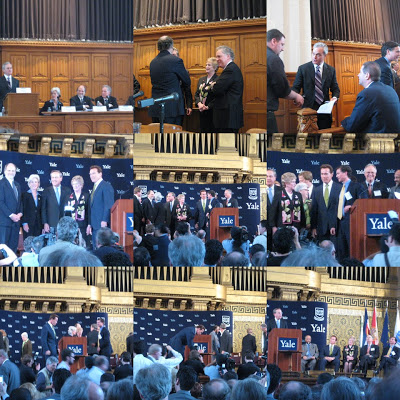